In 2013, the company Zolotaya Balka – held a raffle of prizes, namely 4 cruises. The action was called "4 cardinal points". The essence of the action is such that it was necessary to buy a bottle of Champagne Golden Beam. Register the code on the site – and win the replenishment of the mobile account. 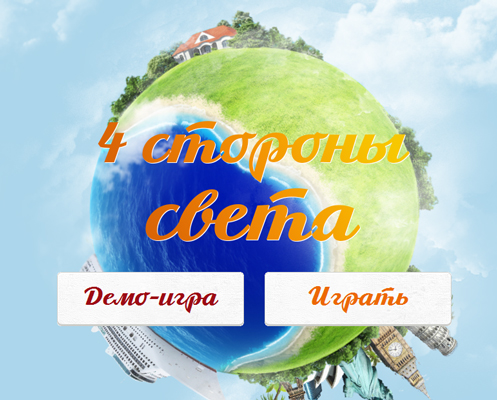 I participated in the action by accident. In 2012, there was a similar promotion, also with codes, but then I did not win anything. And now in December 2013 – I receive an SMS, they say so and so, given that before that you took part in our promotions – so we give you a free code. Then I entered this code on the site – played the game – 4 sides of the world and won a replenishment of 50 UAH on my mobile! Cool! After that, I basically forgot about this prank.

And they reminded me of him in early 2014. There, one man from Simferopol refused a cruise and was replayed. And voila – I was lucky, I won the Cruise! First, I was congratulated on the radio station Lux-Fm. I didn't really believe in the prize at the time. At lunchtime, I received a call back from the Zolotaya Balka company from the Kiev office, Andrew called. Then I believed more in winning. Later in the evening I received a call from a tour agency – Tov "More Sontsya", Olga Pakulya. Further, all negotiations are reduced to a tour agency. In general, I won the cruise and nothing seemed to portend trouble.

Tov More Sonca – tour operator who does not send winners

To begin with, I was asked to choose the dates of the cruise. I wanted to leave quickly and March was chosen. Screenshots of correspondence with Olga I attach: 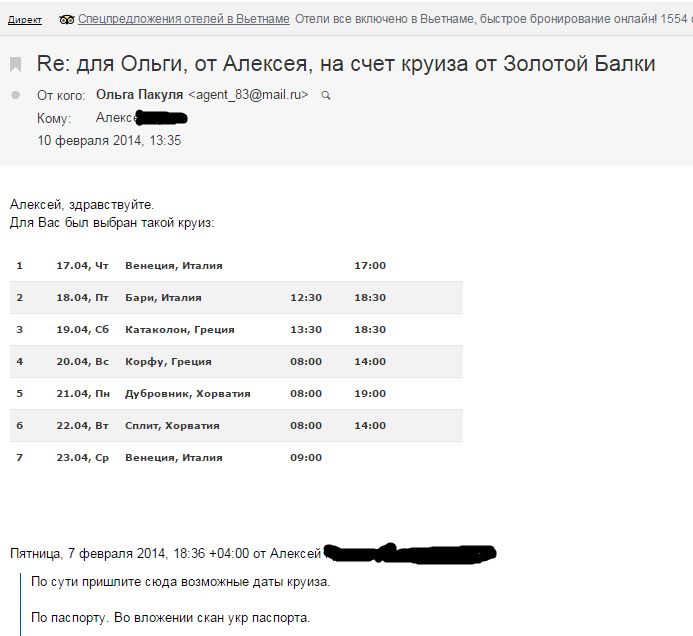 Then it seems like they even booked a tour: 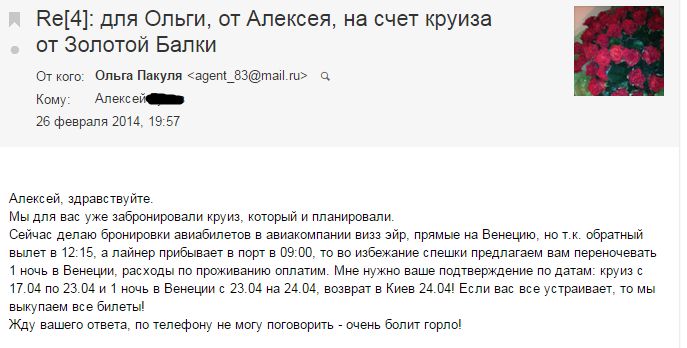 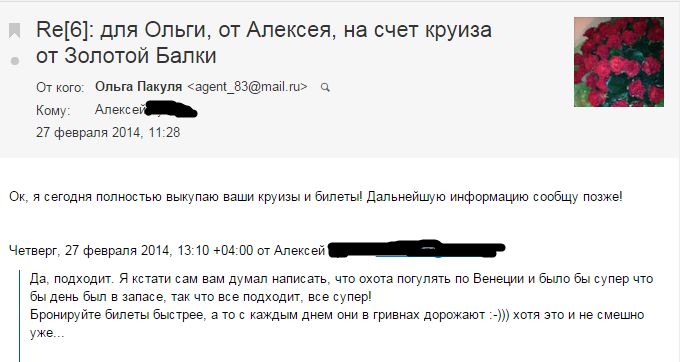 Then there was forgetfulness, from the tickets and the airline. Note that more than 3 weeks have passed by date. That is, a normal person would report overlaps. 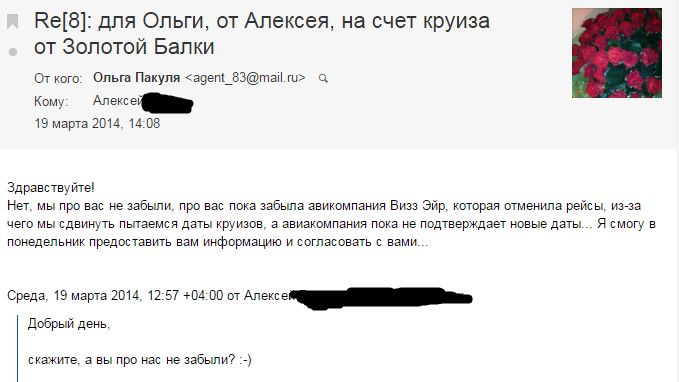 Well, a month later, the answer came that there were problems with both the rate and the bank. Then in Ukraine, the dollar jumped seriously. There was a course of 8, became 13. 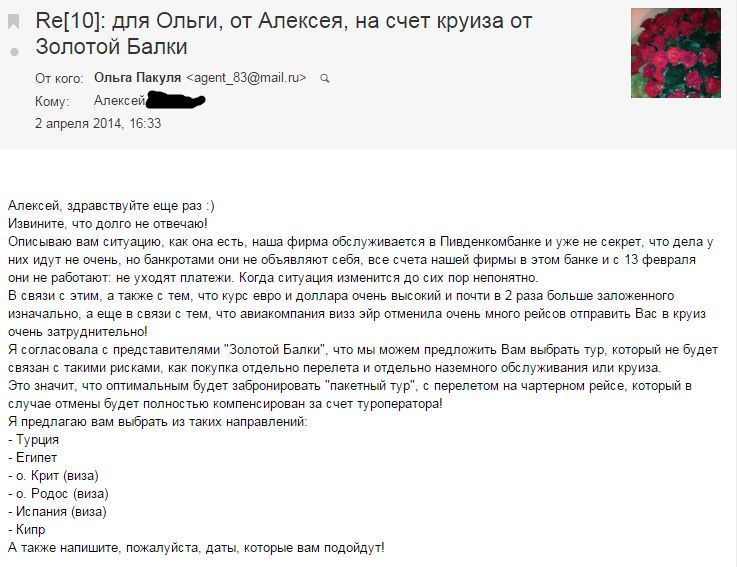 Well, another letter with problems. That we need to wait until the situation returns to normal, and that the winners will DEFINITELY be sent. 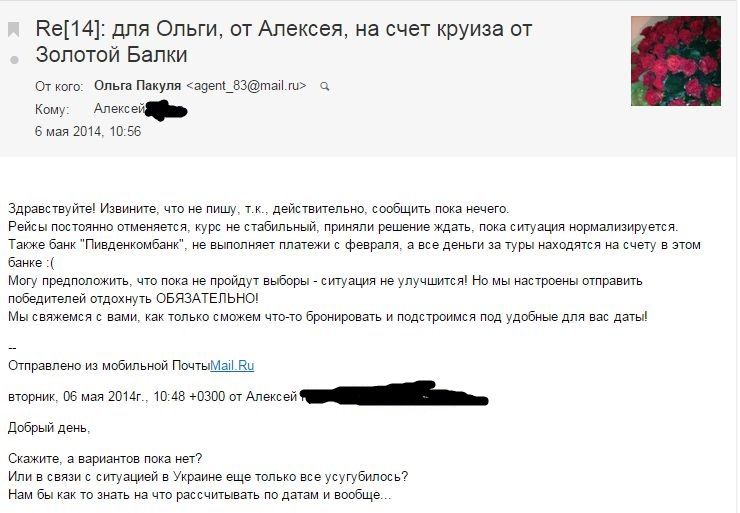 Well, then a letter with a request to send a photo from the rest, because the agency promised the Golden Beam to send a report. Of course I was stupid – I should not have sent anything. 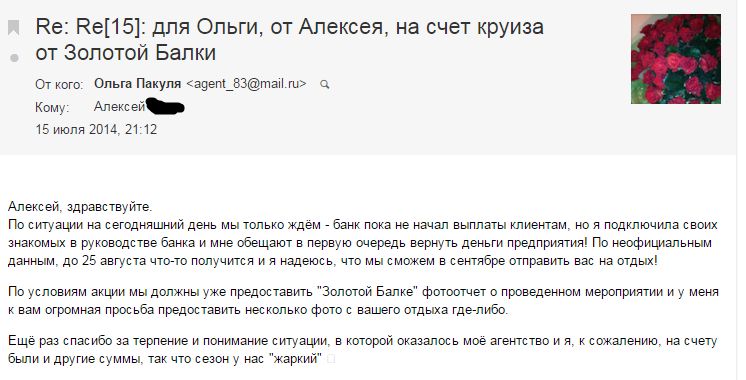 Well, the last letter, in which again everything is bad, there is no money.

And what about the Golden Beam

And nothing, I tried to write to them – but there was no response. In general, now the company is located in another country. They fulfilled their obligations in captivity of money, but the Agency More Sonza failed. Therefore, winners do not always receive prizes. Therefore, my advice to you – if you win something – do not delay in receiving the prize. Immediately call the company if you are not given your winnings. Because over time it will be harder to get!