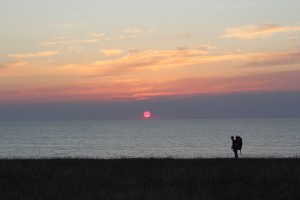 Tarkhankut is a cape that is located on the Crimean Peninsula. It is located near the village of Olenevka.

Tarkhankut is a cape that is located on the Crimean Peninsula. It is located near the village of Olenevka.

There are 2 options, by car and by public transport. With the car, I think everything is already clear. Take and eat. But on public transport, everything is a little more complicated. We went on vacation to Cape Tarkhankut in 2011. We got there by two transports: Train and bus. By train you will need to get to Evpatoria. There is a bus station near the railway station, where you can take tickets to Olenevka. Tickets cost about 30 hryvnia per person. By the way, if you have backpacks, it is better to buy baggage tickets as well. Minibuses do not go very often, 3 times a day, so you may have to wait 4 hours in Evpatoria. We spent this time on the beach. You can by the way go by taxi, the price is about 350 hryvnia per car. By the way, tickets are better and can be bought in advance, i.e. a week before the trip. It's just that when we were coming back, the bus was jammed. But if you bought tickets with seats in advance, then everything is OK. The drive is about 2 hours. The road is dusty and hot. Upon arrival in Olenevka, to relax with tents on the beach, you need to go, or order a taxi, which is very not cheap. Driving 7 km and ask for 100-150 hryvnia, motivating this by the fact that the roads are bad.

A small village, which is located near Liman. By the way, a lot of wind surfers are engaged in the estuary. Well, the sea, the sea is just resting. Most of all I was struck in Olenevka by the blueness of the water in the sea. The sea is very blue and beautiful! I have never seen such water anywhere in Crimea. Here you can shoot an advertisement for the Bounty :-). In short, the sea is beautiful, but also cold :-(. There is still not the southern coast of the Crimea, so the water is colder and if you eat in late summer, then take into account the cold factor. How to rent a house in Olenevka, I think it is not necessary to describe. It's full of grandmothers who are ready to shelter you. Given that I went with tents, then I will describe further the tent image of rest. Upon arrival in Olenevka, we had a snack in a local cafe, bought drinking water and moved to the north side of the village. By the way, tents are put on the south side, so decide for yourself where to go. Wood is sold in Olenevka, so if you do not have a burner, you can buy firewood in the village, because Tarkhankut is a steppe and there is really NO firewood there. And yet, mainly to Tarkhankut, they go to rest by car!

We walk towards the exit from the village. Turn left and walk along the estuary. Soon we come to the second part of the village, where you can board, then at the end we turn to the right and come to the sandy road that stretches along the sea. Wow. Sea :-). Well, then along the shore there are tents and a bunch of cars. Basically, the coast is precipitous, and where there is an approach to the sea there are people everywhere. And it's real everywhere!!! After all, on the car +-10 km do not play a role, but it is really difficult for us with backpacks. As a result, we decided to stop near the gas station. Many people stop there because there is fresh water in the well and a normal approach to water. In short, a positive. The only BUT, it is better not to drink it raw, many complain that after that it is diarrheal :-). Well, you can cook with that water and boil tea too. You can go to the gas station in two ways: along the sea, or straight through the steppe. Through the steppe a little closer, but not so beautiful and cars there more often drive.

Tent camp on Tarkhankut, where to put up a tent

You can put tents on one or the other side of the gas station. We put on the far side, i.e. from the side of the well. There is a lot of space there, but take into account the factor of neighbors. There are neighbors who listen to music in the car for half the night. We set up shorter tents and went to bed. The area there is steppe, so all the tents were instantly covered with a layer of dust.

Food on Tarkhankut, we cook ourselves

As mentioned above, there is no firewood. Therefore, you need to take either a burner or firewood with you. We took a gas burner. For four people for 3 days we had enough of one cylinder. We ate mainly once a day hot food, 2 times a day tea-coffee and canned food. Overall, there was enough food. Many advise to take a lot of at least 2 cylinders of gas. If you are a fan of food, then take 2, because one was barely enough for us.

Toilet on Tarkhankut, where to go?

With the toilet, everything is sad. You have to go beyond the horizon :-). That of course built booths, but when they go there 5 times big, the 6th time you do not want to go there and you need to scratch over the horizon :-).

Windy and cold. The sea is cold, often stormy. The wind is blowing strongly. in the tent sometimes it becomes scary that you will be carried away with it. But overall it's cool :-).

Now let's move on to the positive. Sea. The sea is beautiful. When it's not stormy there it's cool to swim with a mask. The bottom is rocky, so everything is clearly visible. You can catch crabs. You can just jump off the pebbles. Or lie on the beach on the rocks. But if there is a storm, then going into the sea is problematic, due to the fact that there are stones, and it is very easy to slip and scratch. Therefore, in a storm, few people swim there. By the way, a lot of divers come to Trakhankut. They say there is something to see. On the first day of rest, we decided to see the sunken barge. To be honest, there is nothing much to see there and walk to it from the gas station for 2 hours. But it is worth taking a walk even further north of the gas station. On the way, we came across tent spots that were near the water. True, you need to go down to them and it is not convenient. But the place there is good, quiet and the sea is nearby. And then we saw a barge. Overall nothing interesting. It is located in the sea, not far from the shore. If the sea is calm, you can swim and climb to it. 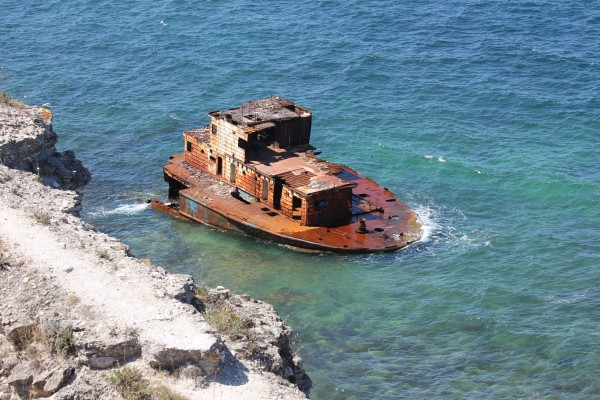 If you go even further, you can find another tent camp. And by the way, a lot of scuba divers come there. And in the sea there are some buildings, it is not clear why. Kind of chicken legs. Maybe the seagulls live there, I don't know.. And then we went back to our tents. In general, there is nothing more to do and watch on Tarkhankut. After staying there for 3 days, we returned home. As we walked back to Olenevka, we saw dolphins in the sea. Apparently it's a frequent occurrence there, dolphins. Eh.. beautifully they swim.

With tents, it makes sense to go there only by car. It's both simple and you can take a lot of things. Many come with inflatable boats. In Olenevka there is very blue water, it is fascinating. Just for her sake, I would go there again. Well, with backpacks and tents, I will no longer go to Tarkhankut. It's very hemorrhagic and the road is long. Well, below, see the photo from Tarkhankut: 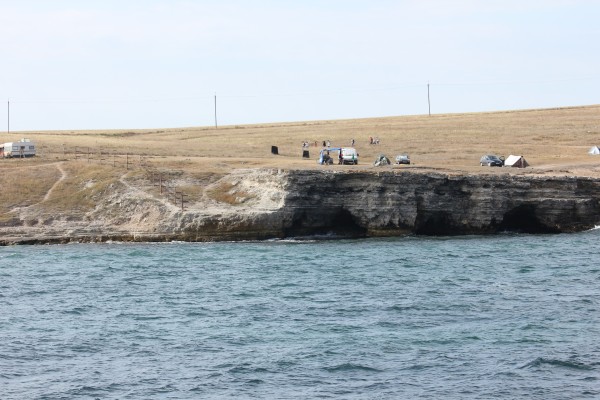 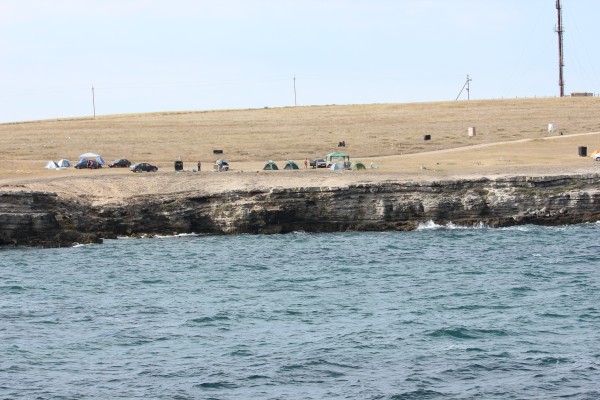 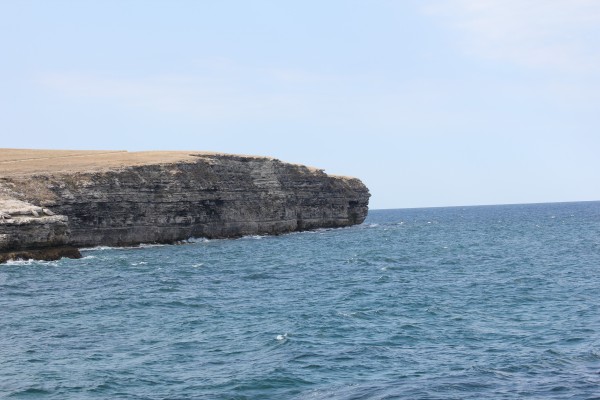 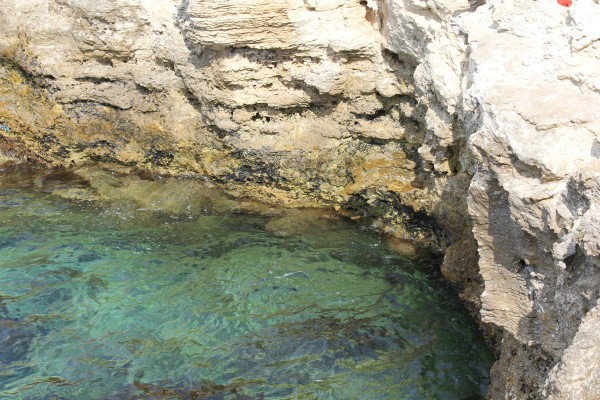 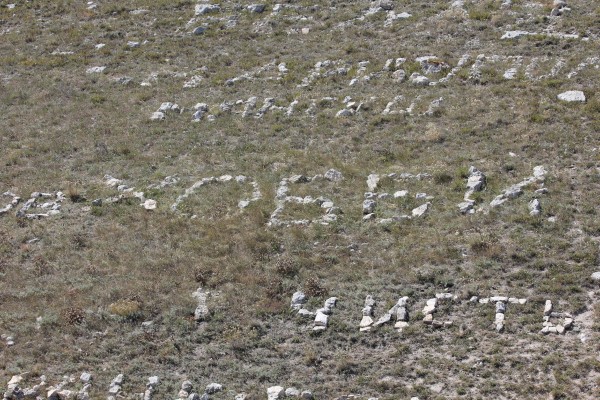 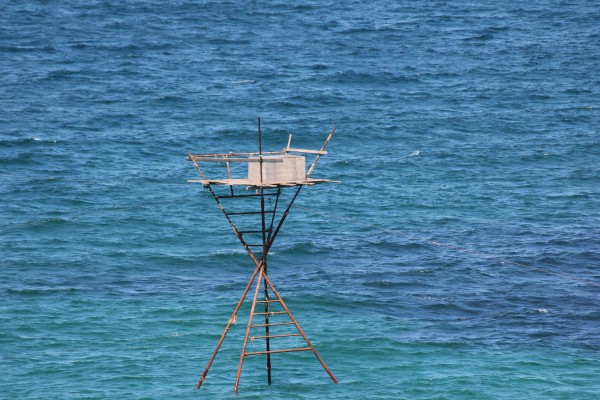 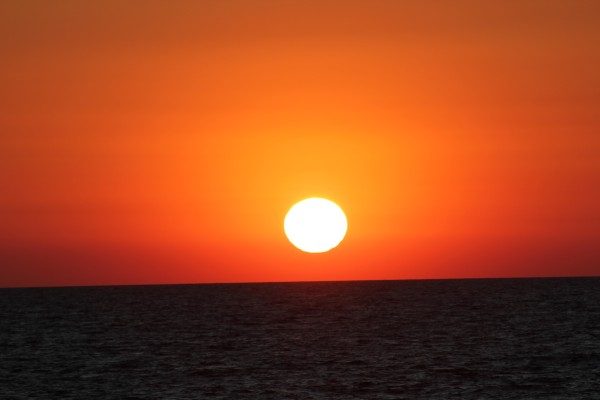 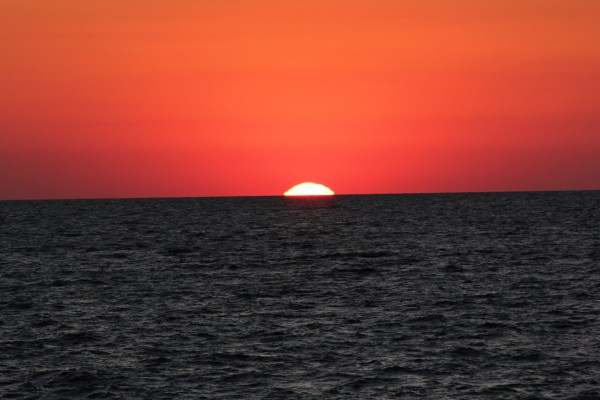 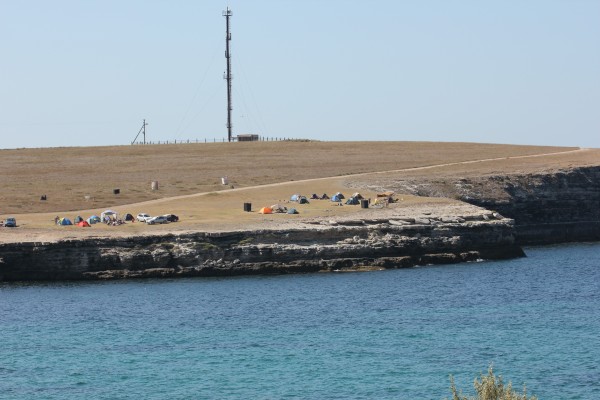