Given that there is nothing much to do on the big island of Phi Phi , it was decided to take an excursion to Phi Phi Ley. This is the same island on which the film "The Beach" with Leonardo DiCaprio was shot.

How to get to Phi Phi Ley

Given that there is nothing much to do on the big island of Phi Phi , it was decided to take an excursion to Phi Phi Ley. This is the same island on which the film "The Beach" with Leonardo DiCaprio was shot.

How to get to Phi Phi Ley

The cheapest and easiest way is to book a half-day excursion. It costs about 400 baht in any bureau. However, you will immediately be told that if you want to visit the beach of Maya Bay, then you will need to pay another 100 baht on the spot. In total, a half-day excursion costs 500 baht. You will even be fed rice with an egg, drunk with water and treated to fruit. By the way, there are 2 types of excursions: Morning and afternoon. It is better to choose the one that falls on the time of the tide. Otherwise, it will be impossible to swim on the beach of Maya Bay. Well, one more thing, on the afternoon of the tour you will see the sunset. A more expensive way, but also more romantic, is on a bathing beach, agree and rent a boat. That is, that you would be taken wherever you want. True, this pleasure is not cheap (from 3000 baht).

Personal experience of excursion for 500 baht to Phi Phi Ley

We decided to take a lunch tour to watch the sunset. The tour was bought right at the hotel. The price for them is the same everywhere. To begin with, from the hotel we followed the boy who escorted us to the tour office. Where they glued us on stickers and gave us a bottle of water with a bag of food. Then we waited until everyone was packed up and moved to the pier, where there are many boats, i.e. where they do not swim. Upon arrival, everyone began to be seated in boats. The boats were packed to the brim: Someone was lucky enough to sit without a canopy, in the heat on the bow of the boat: 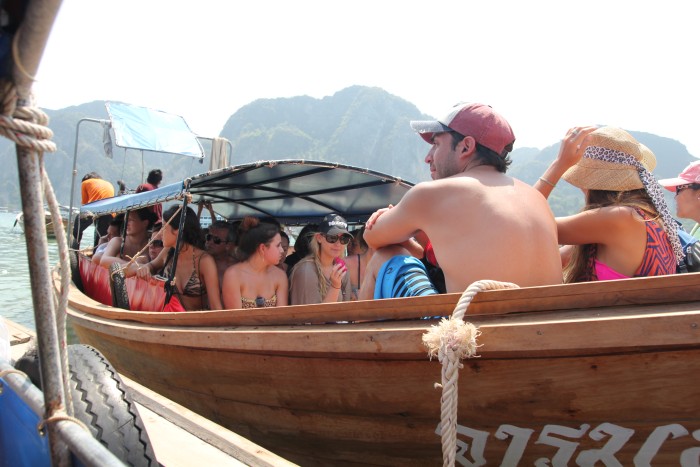 From our boat, a couple of tourists came out, just not withstanding the crowds. Others were seated in their place. But no one sat on the bow without a canopy, although they sat on other boats:

Right there, in the bay of the pier, there was an overturned boat, so sometimes these longboats turn over: 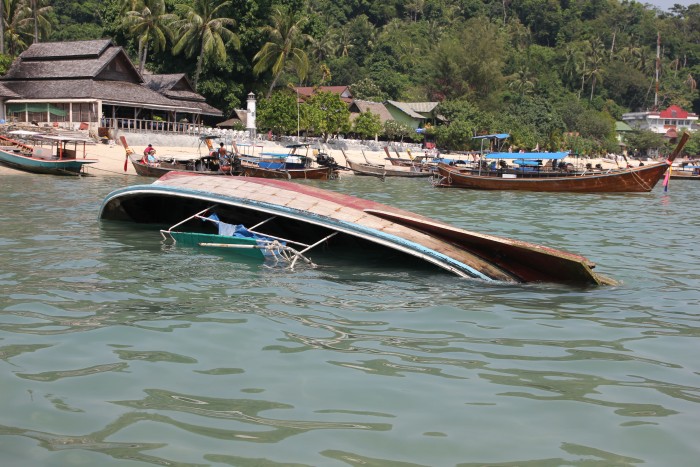 And for what at the entrance to the island we paid 20 baht, for garbage collection: 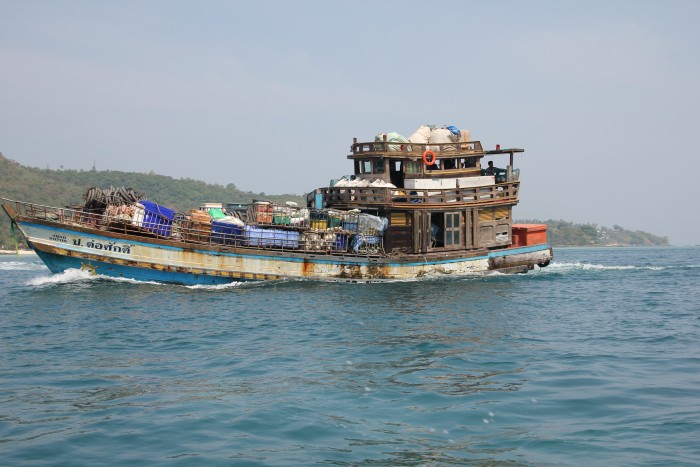 Well, actually on the way: 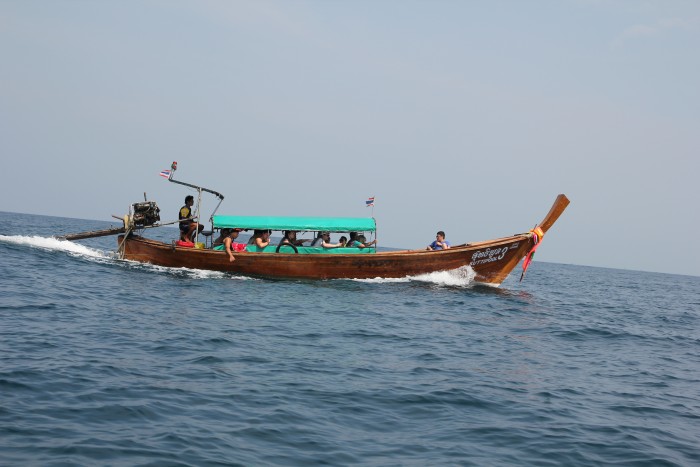 We swim the island of Phi Phi Ley and enter the bay for snorkeling, i.e. swimming with a mask and watching the fish: 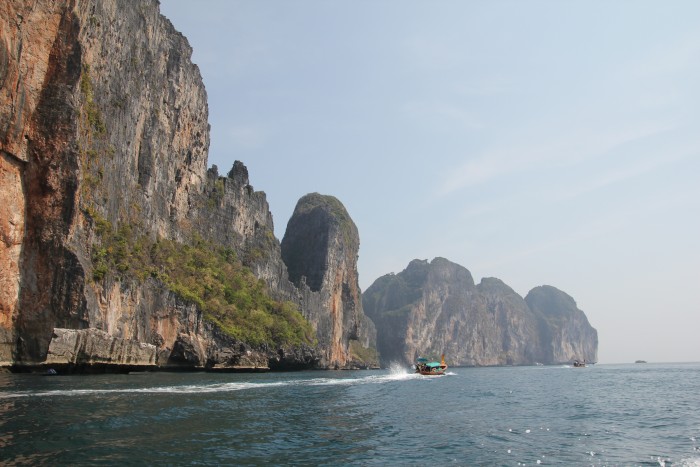 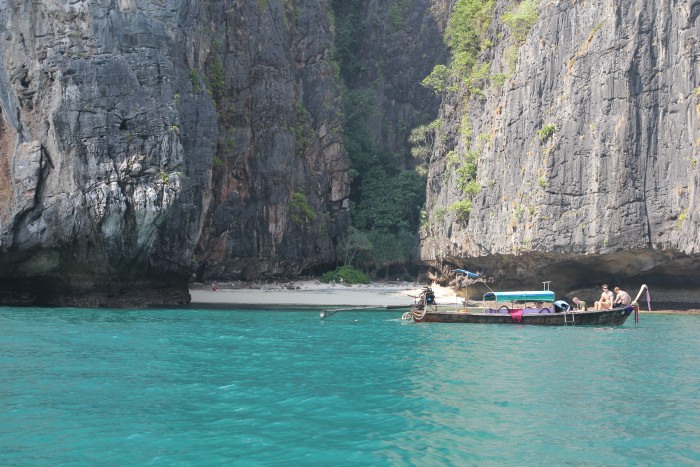 Diving (about 30 minutes we swam), the guide says who wants to go to the beach where DiCaprio was filmed, pays 100 baht. Well, actually everyone paid. After that, we are taken to this very beach. Given that it was low tide, the boat stops 50 meters from the shore. Then you have to walk. So I advise you to take slippers with you, which are not a pity to wet: 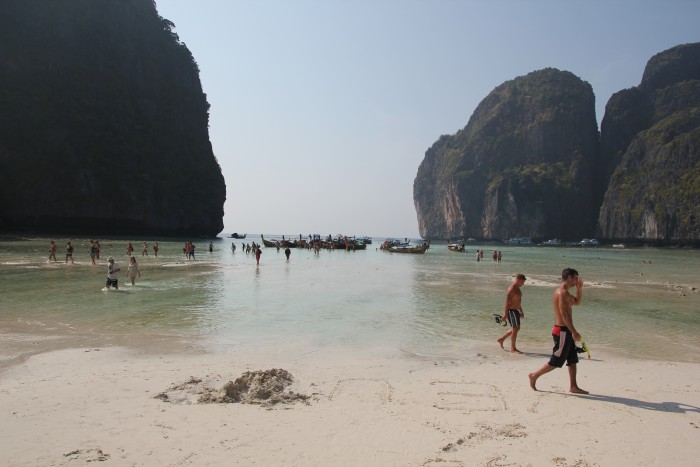 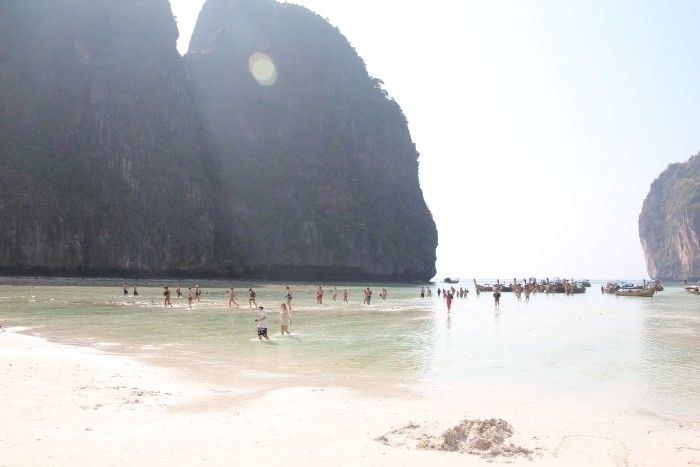 In fact, under the scorching sun on the beach there is nothing much to do. Some hide in the shade under the rocks: 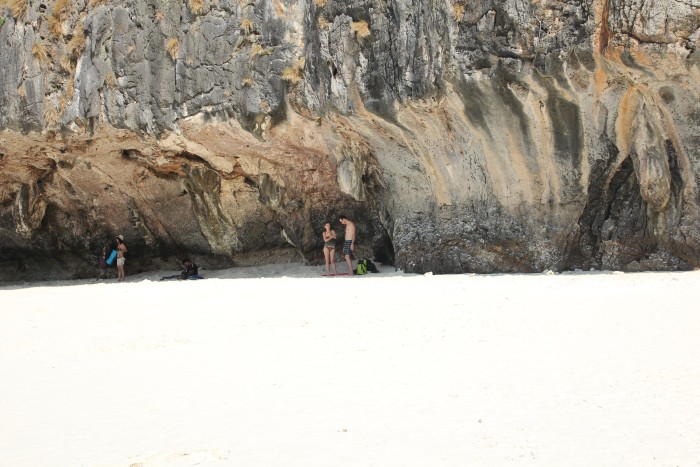 And some go to the bar and mini jungi park, which is nearby: 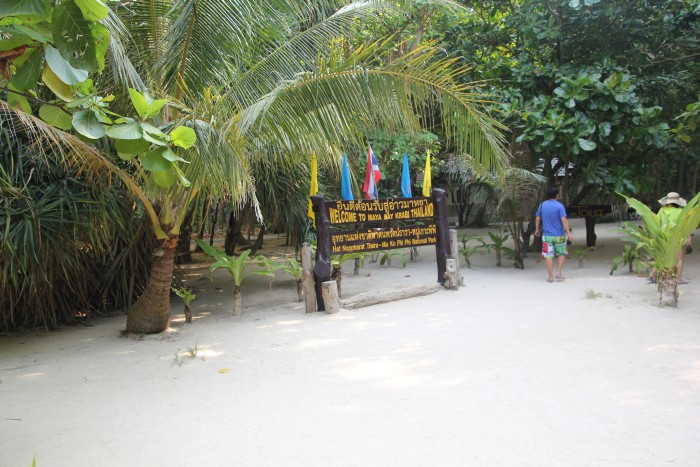 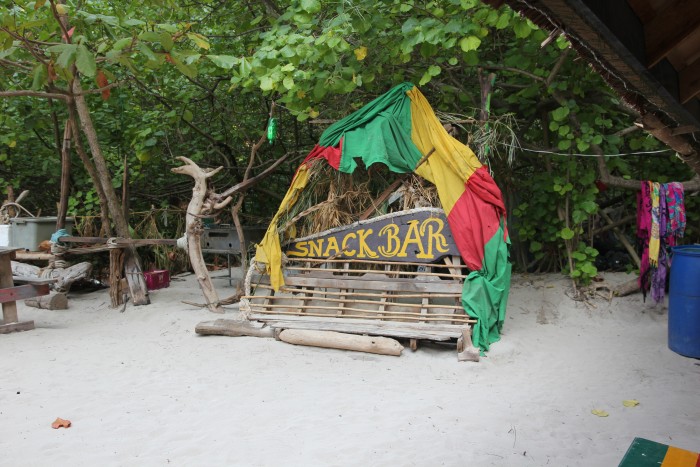 After walking deep into the park, you can go to a small observation deck, from which you can see another island, next to Phi Phi Lei: 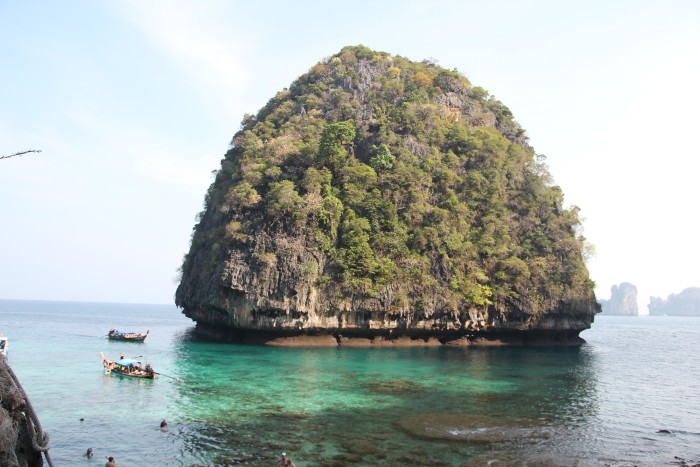 That's basically all, time in the bay an hour, what else can you do, well, sunbathe: Well, you can still draw on the sand: 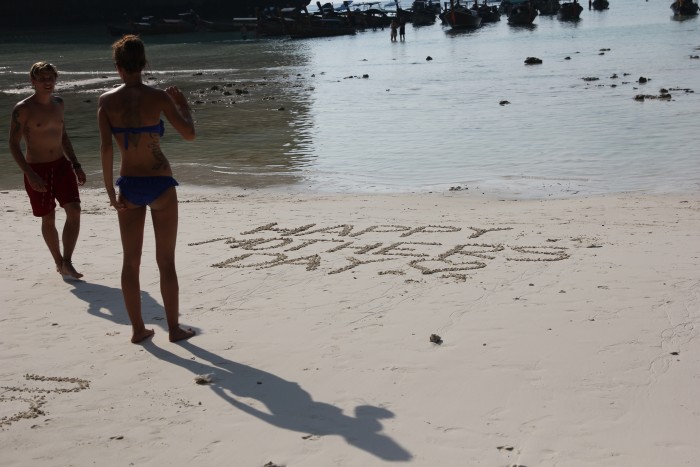 Well, then to the boat and sail to Monkey Beach, i.e. the beach with monkeys. Goodbye "The Beach", as it did not impress me: 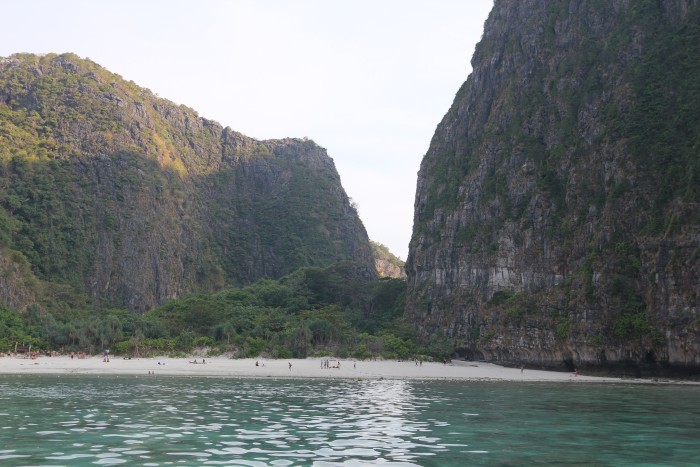 On the way there is such a cool house: 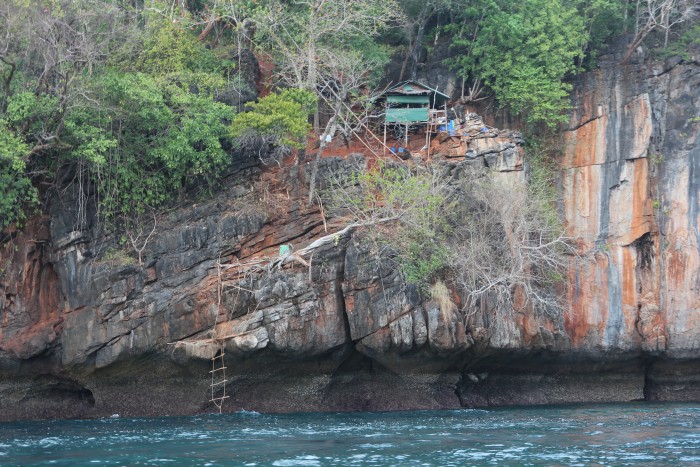 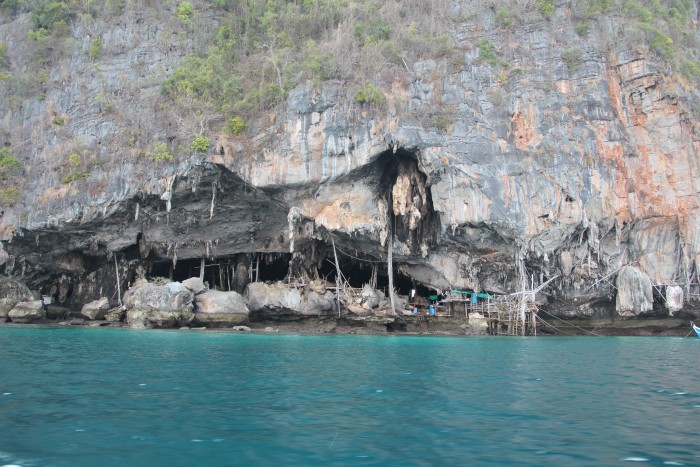 Approaching the beach with monkeys:

And here are the macaques. You need to be more careful with them, as they can bite for food. And in general, they are somehow not gifted with intelligence. Let's say one monkey grabbed 2 bottles of Coca-Cola and while one was delivered, everything spilled out. In short, for food, macaques are ready for a lot: 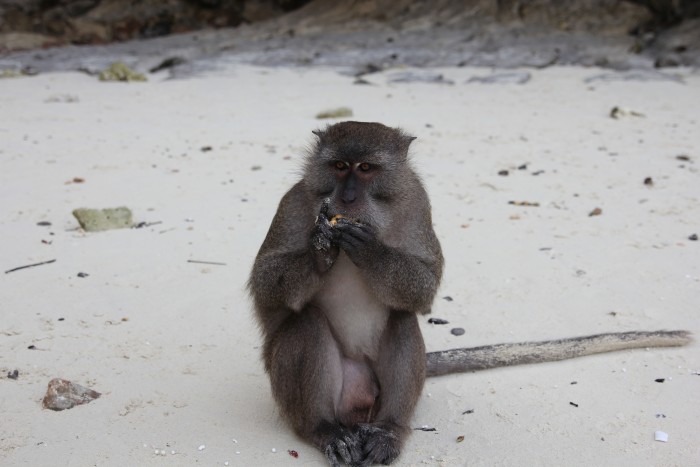 Yes, dude, everything has already poured out there, you need to keep the bottle straight: 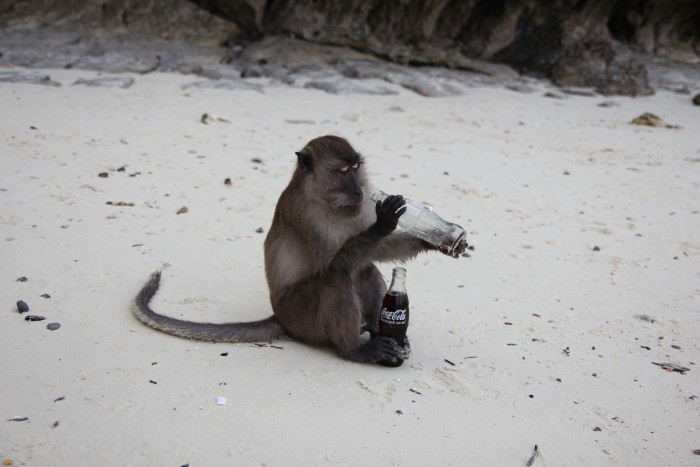 That's why monkeys are given especially smart beer, I do not understand: 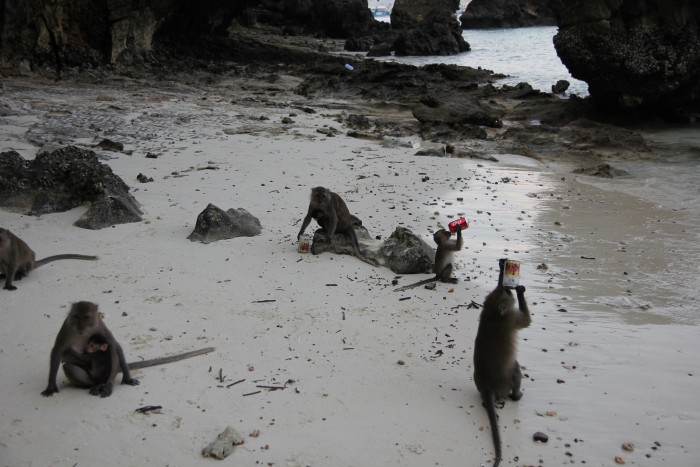 The cubs are very cute: 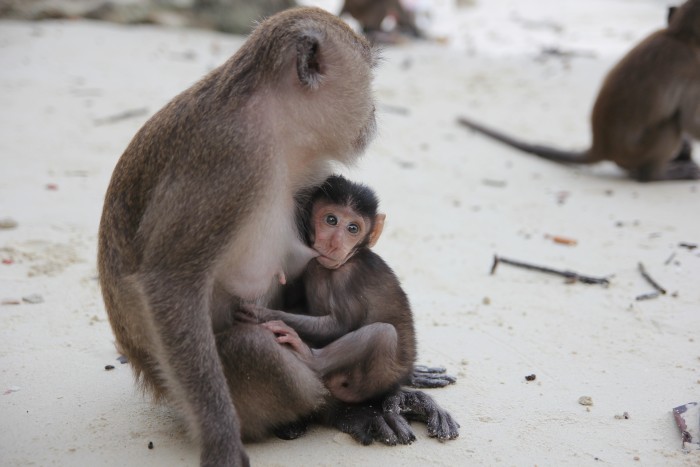 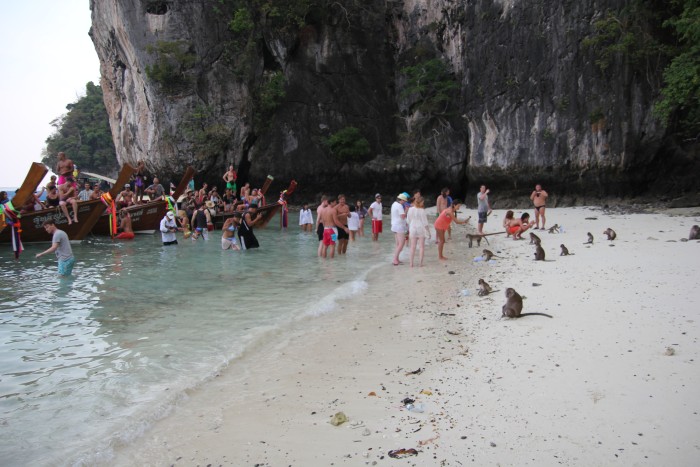 In short, after watching the monkeys, we swam to watch the sunset: 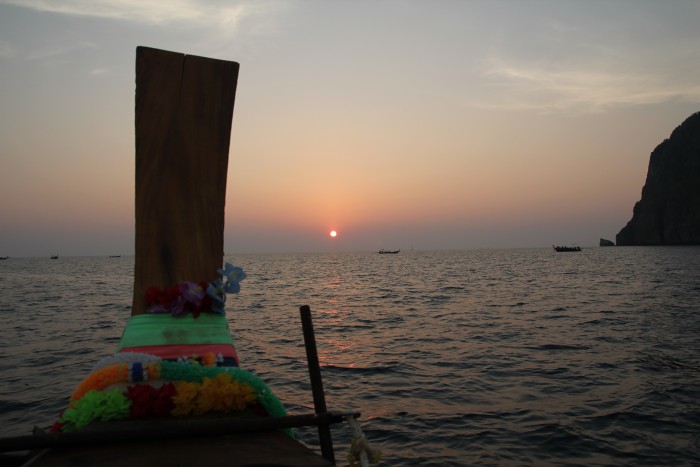 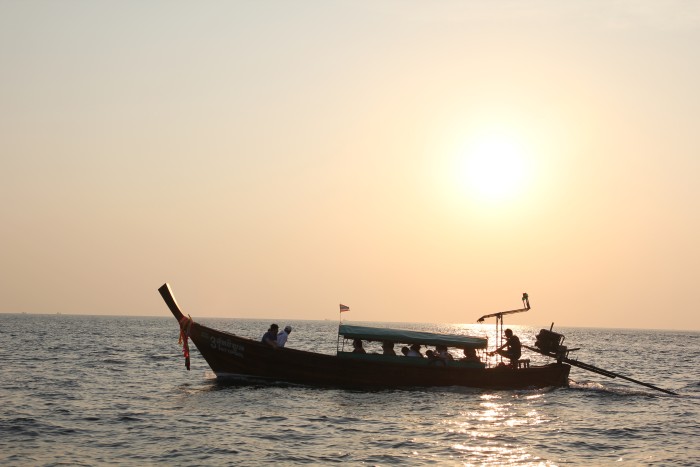 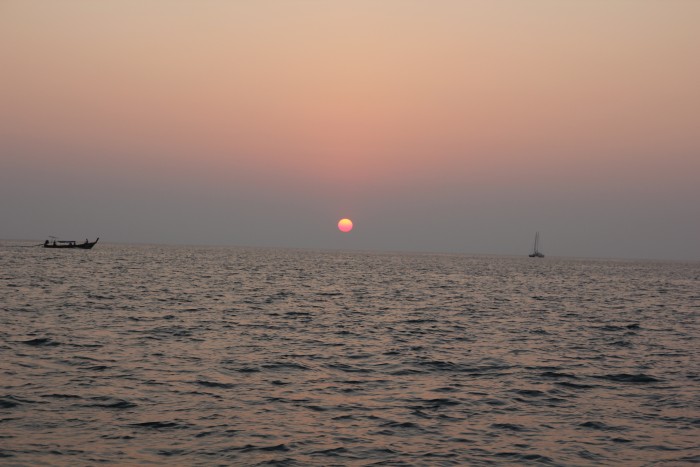 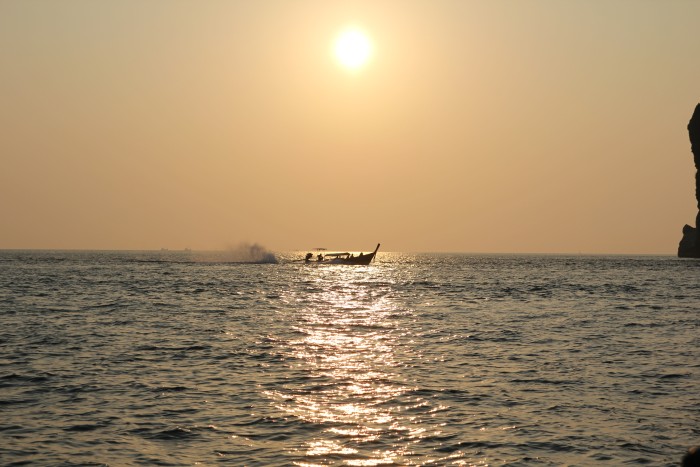 Well, then to the port and home, to discuss the impressions of the trip :-). 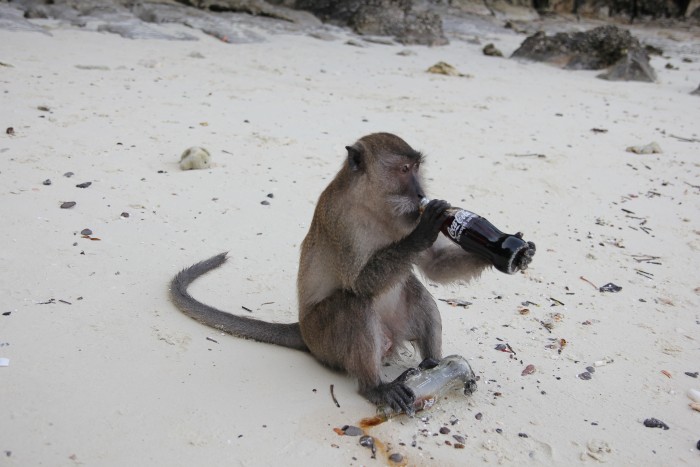