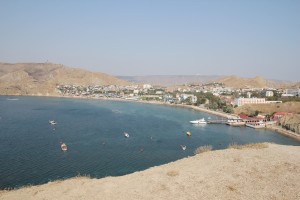 Ordzhonikidze (Crimea) is a small village on the seashore. It is located not far from the city of Feodosia.

Information about Ordzhonikidze, who is in crimea

Why the one in Crimea? Because there are still a few towns with this name. One of them is located in the Dnipropetrovsk region. But in this article we are talking naturally about Ordzhonikidze who is in the Autonomous Republic of Crimea.

Ordzhonikidze (Crimea) is a small village on the seashore. It is located not far from the city of Feodosia.

Information about Ordzhonikidze, who is in crimea

Why the one in Crimea? Because there are still a few towns with this name. One of them is located in the Dnipropetrovsk region. But in this article we are talking naturally about Ordzhonikidze who is in the Autonomous Republic of Crimea. If we talk about the town of Ordzhonikidze itself, then it is located in the south-eastern part of the Crimea, 14 km from Feodossia, behind the Tepe-Oba ridge. What is good about Ordzhonikidze is that there is no transit transport through it, i.e. the village is clean. And besides, it is washed by two-anchor bay and Provato Bay (part of the Koktebel Bay). The places near Ordzhonikidze are beautiful. There are beaches, there are mountains, walking in the Ordzhonikidze district is very positive.

How to get to Ordzhonikidze

What to see in Ordzhonikidze, attractions

As such, there are no attractions in Ordzhonikidze. There you can just wonderfully relax with your family. There are excellent beaches, there is a place to put up tents and there are beaches for nudists. And besides, there is a beautiful, mostly clean sea. Rarely are there storms. On the rocks there you can fish for spinning. You can smear clay :-). Most of all there is remembered nature and mountains, on which you can climb. Ordzhonikidze is not far from Koktebel, which can be reached in 4 hours. Well, as for discos and cafes, they are also available on the embankment.

Review of holidays in Ordzhonikidze, photo

Well, now it's time to share my vacation in Ordzhonikidze. I was there only 2 times, in 2010 and 2011. The first time I went with tents, and the second time we rented accommodation in the velvet season. So, the trip itself. We arrived to Simferopol, as we could not take tickets to Feodosia. We go to the bus station. On the way, taxi drivers who very obsessively offer their services at a price 3 times more expensive than to go by bus. We naturally freeze, but then one uncle says: 20 hryvnia to Feodosia. State taxi. We were surprised, we already wanted to sit in … a taxi, which turned out to be a minivan. But then the uncle said the price is 80 hryvnia. What about 20? And 20 is what would stop you. This is the kind of deception that is flourishing in Crimea. We naturally turned around and left for the train station, from where we left 15 minutes later for 37 hryvnias. That's it, I won't talk to the barkers at all anymore! They will 100% deceive, only time is wasted We reached Feodosia in 2 hours. Then take a minibus (number 2 or 4) 15 minutes to the central market, and from there by minibus 20-A to Ordzhonikidze. By the way, it is not long to go, about 20 minutes. Prices for a minibus in 2011 were as follows: in the city 2.6 UAH, and to Ordzhonikidze 5.1 UAH. I don't know why these inconvenient 10 cents were added. We went to Ordzhonikidze 🙂 We went in the velvet season, in mid-September, so the housing was a lot. At the bus stop, a kind aunt came up to us and offered us accommodation. Knowing that there was deception all around, I was not very inclined to rent a house at the station like this. But it turned out that its price is only 80 hryvnia for two per day and that for 3 days to rent it is also not a problem (usually everyone wants to rent housing for at least 5 days) and we essentially immediately went to see the room. Renting housing in Ordzhonikidze The room was located in the private sector. It was about 10-15 minutes to walk to the sea. The room had 4 beds. Toilet and shower outside in the hotel building. The shower was hot as there was a boiler. A kitchen and fridge were also available. In general, the aunt had 3 rooms in the courtyard: 2 downstairs and one at the top (like a trump card, they had their own shower, kitchen and toilet). 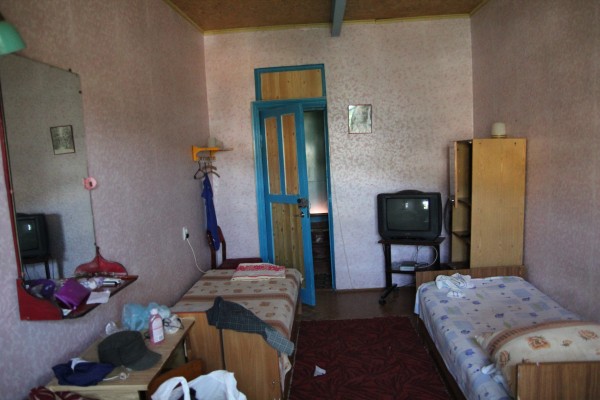 As a result, for 3 nights we paid for two 250 hryvnia. I like to relax in the velvet season :-), there are fewer people, prices are lower. By the way, housing in Ordzhonikidze is offered by aunts at 2 stops of the minibus. So if no one approaches you at one stop, just go to the other :-). Sea, sun, beach After sorting out things, we went to the sea. The city beach, as it usually happens, was not distinguished by the crystal clearness of the water, so we always went to swim in the bays, which were a maximum of 2 hours to walk. But there are a lot fewer people in the bays! There you can sunbathe the drumstick and smear with clay. On the first day we went to the bays that were away from Koktebel. By the way, it is better to go there by sea, that is, along the coast. You can climb mountains on top, but it is really scary there and you can fall. Along the way, you'll come across a tent city. Well, then it will be more or less deserted. It is not very convenient to enter the water in the bays, but the water is very clean! Snorkeling there is a pleasure. You can be taken to the bays by boat, but I was not interested in how much this service costs… On the second day we went to another bay, which is located in the direction of Feodosia. Most of all there we liked the stones on which you can sunbathe. Well, the sea there is also clean and it is convenient to go into the water if there is no storm. It's great to snorkel there too! And besides, on those stones, many fish for spinning. Food in Ordzhonikidze We ate in a cafe on the embankment, called "Bistro FOOD". Remember this name, there is good service and low prices, and besides very cheerful staff :-). Attention, on the waterfront there is another "Bistro", do not confuse, you need "Bistro FOOD". Prices for food were as follows: soup cost up to 10 hryvnia, large pizza 35-45 UAH, chebureks from 6 UAH. up to 11 UAH. depending on the filling. Beer was from 6 UAH. In short, the prices are very democratic. A large pizza could be eaten very well together. 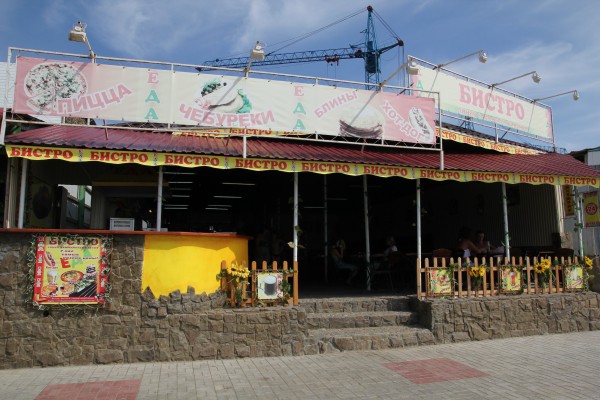 Well, now about the deception and negativity in Ordzhonikidze As you know, you Crimea is a very widespread deception and sometimes it spoils the impression of rest very much. Sometimes I even want to go there only by my own transport and take everything with me, because in the Crimea you can be deceived at every step! First, draught beer. I take it and it's sour. Total 12,5 UAH. can be said to have been thrown away in vain. Second. I take fish from the store. The first time I took everything OK, and the second time the "boy" (obviously the son of the saleswoman) slipped me a very dry fish, it literally had to be broken from the knee. In a word, you need to double-check everything at the tray! Buy fish, check, buy beer – try it, etc. Or buy only everything sealed. Well, rudeness in the Crimea is generally at every step. There, for some reason, the locals take you for a wallet with money and moreover, you are like a wallet, they also owe them, they say, come, pay triple the price for everything and do not complain about the service, which in the Crimea has never been and will never be! On the way back, when we were on the bus to Simferopol, we sat right behind the driver. And at some point in the trip, he and the tank leaked coolant. She gave us backpacks that were under the seat. The driver just said "everything will be normal" and drove on, and we had to change to other seats (good thing we were free). Upon arrival, I approached the driver and had the following dialogue: – What is your name – And what is the difference? – well, how? – Roma – and full name? – Roman (joker) … He never gave his full name. And the fact that the liquid flowed is "iron", it cannot be responsible for iron. In short, such bullish drivers make up the majority of drivers in the Crimea. No one is responsible for anything. Here are a couple of photos of how the minibus was slammed and the blurry photo of roma's driver: 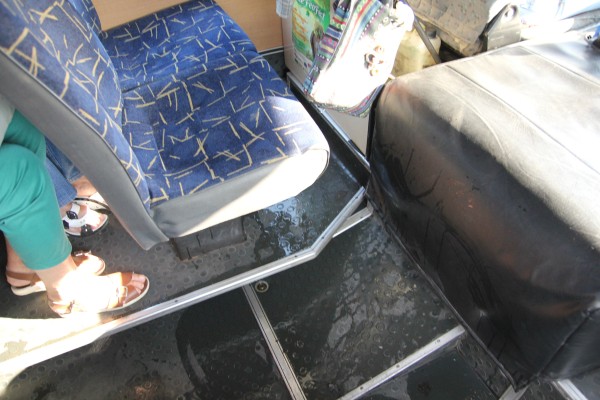 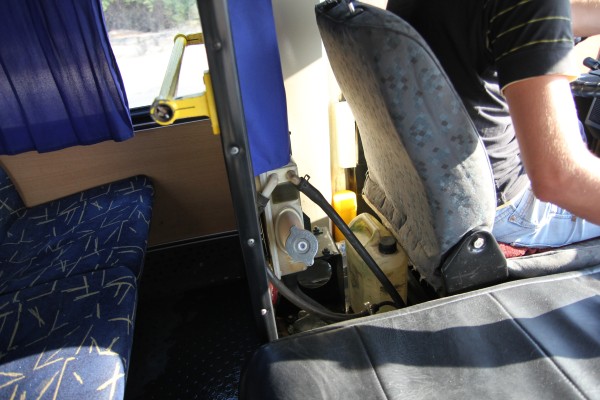 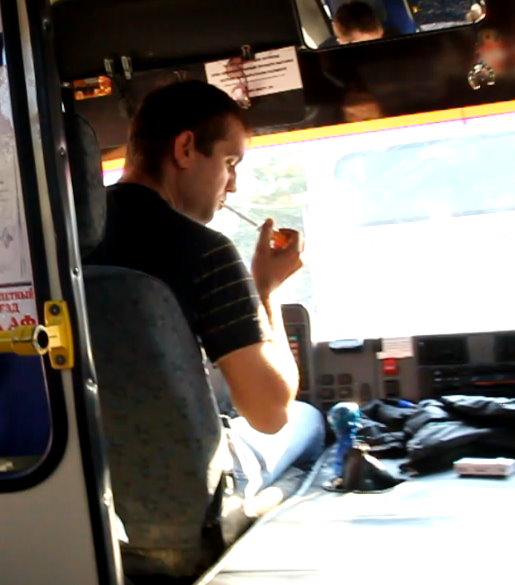 And the train was funny caught. There for tea you had to go through 3 cars, because in none of these three cars worked the boiler :-). How can I complete a train of 5 consecutive carriages in which it is not possible to boil tea? And this is quite common in Ukraine. When will our people become friendlier and more responsible? Well, in order to end your story on a positive note, here are some photos from the rest in Ordzhonikidze: 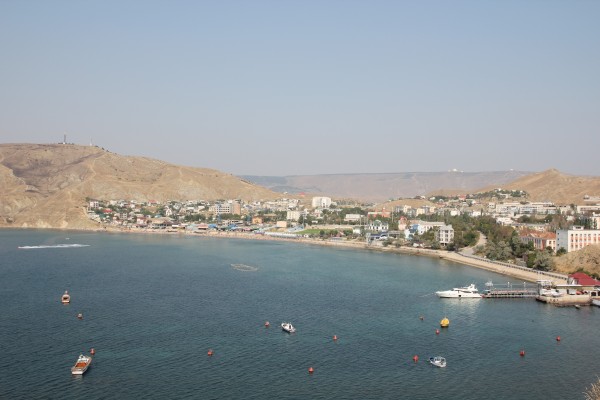 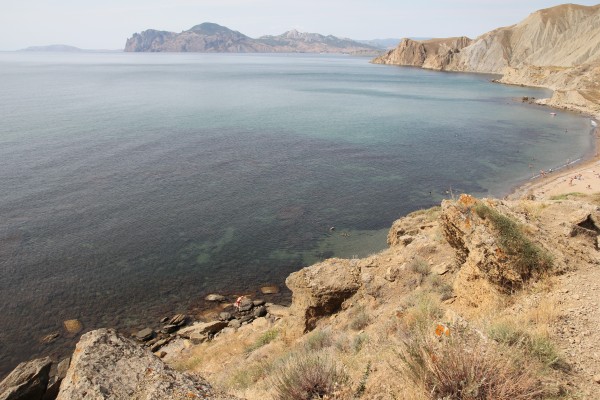 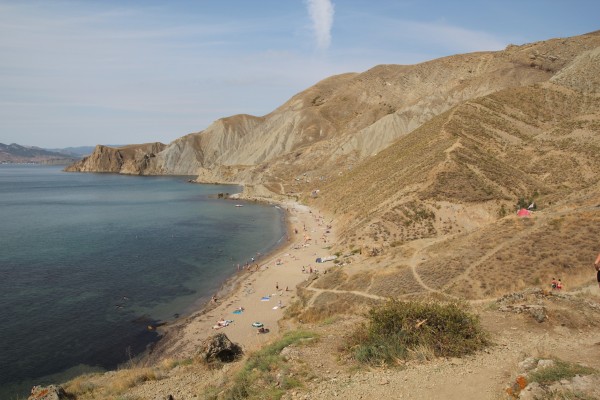 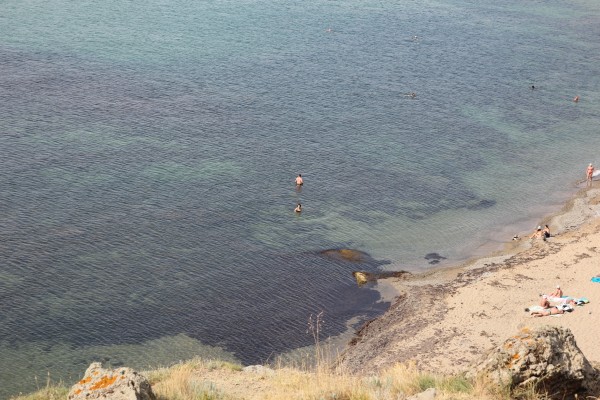 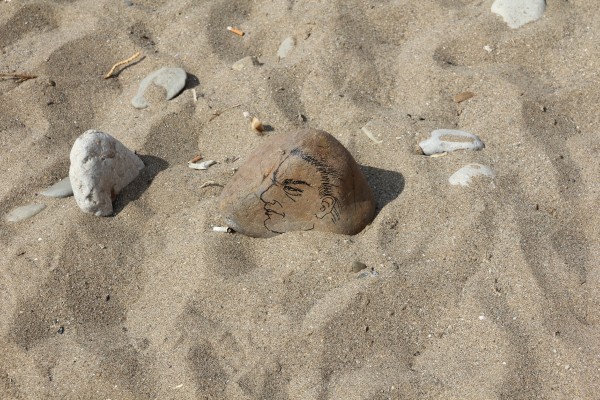 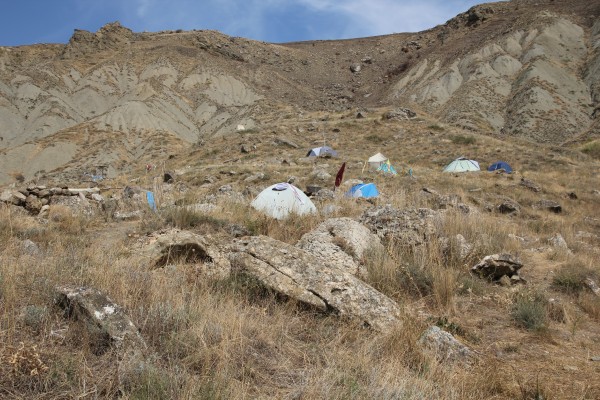 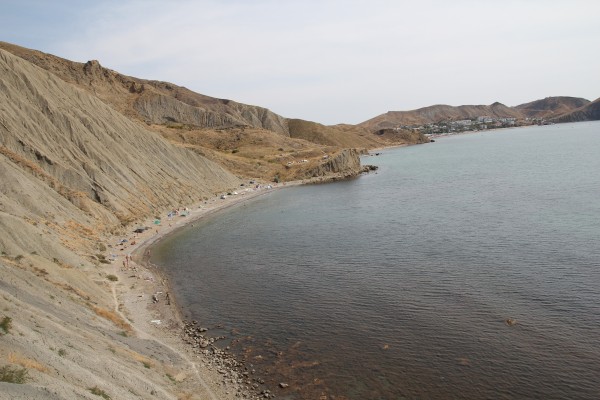 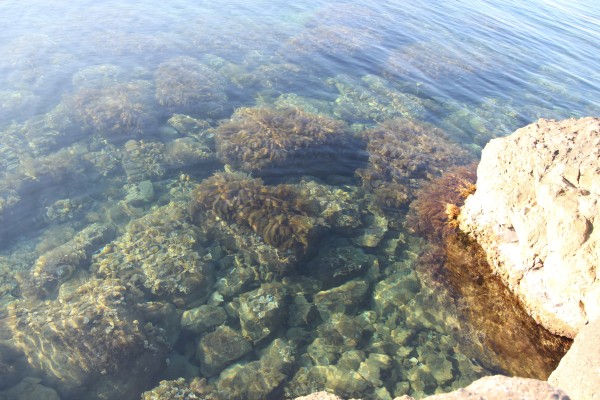 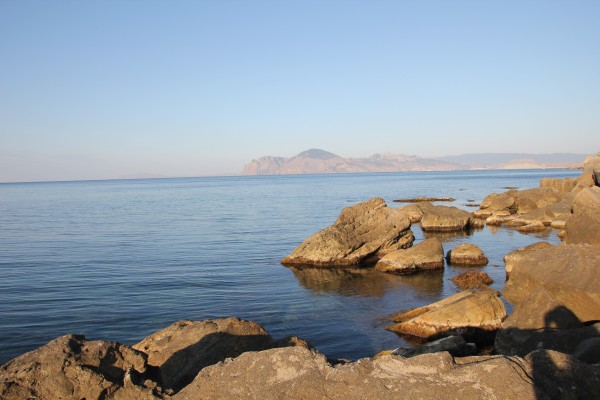 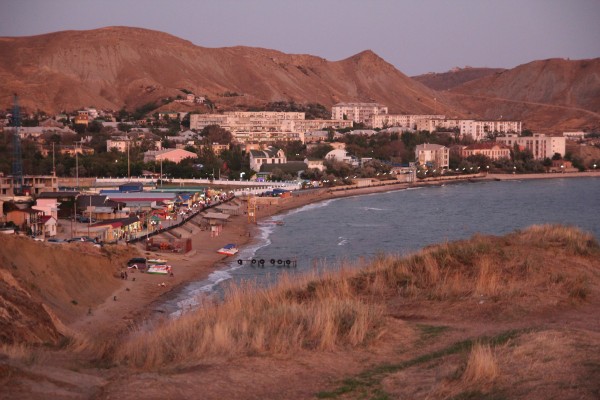 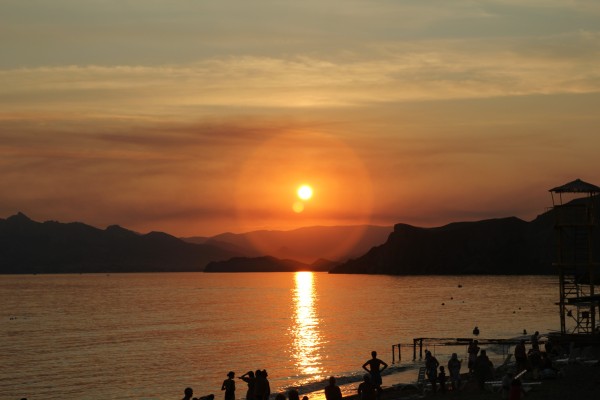 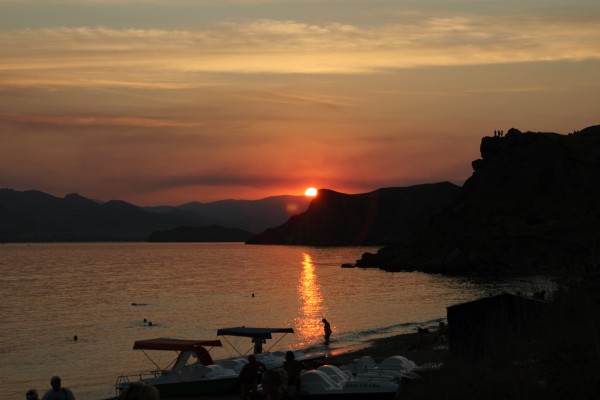