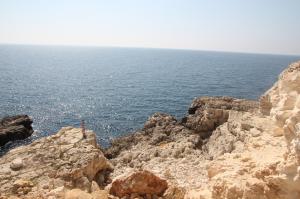 2014 is not a simple year for Ukraine, it is not an easy one. But let's not talk about the sad, let's return to traveling. What to expect when traveling to Crimea for Ukrainians.

The price of tickets to the Crimea has risen slightly, it is difficult to estimate how many times, because all railway tickets have risen in price. In general, the ticket in August 2014 cost about 150 UAH.

2014 is not a simple year for Ukraine, it is not an easy one. But let's not talk about the sad, let's return to traveling. What to expect when traveling to Crimea for Ukrainians.

The price of tickets to the Crimea has risen slightly, it is difficult to estimate how many times, because all railway tickets have risen in price. In general, the ticket in August 2014 cost about 150 UAH. Travel time has changed. Because you have to travel by train as many as 2 customs. As a result, it became 2 hours longer to go. And often there are delays at customs, so add another 1-2 hours to the two hours on schedule for a delay at customs. Our train was 2 hours late. Customs is tin. They exhaust the nerves, besides, now you can not carry what you want. For example, to bring lard and meat is already a problem – they can withdraw. Therefore, read the restrictions, because Crimea is Russia, with all the ensuing restrictions on transportation. Documents at customs. You need a passport and it is better to take a passport with you just in case. One person was thrown off the train with us, because he did not have a photo pasted for 45 years. Therefore, with the documents carefully! In general, everyone is allowed to pass, the bags have not been looked at by anyone – but they can look! The currency in Crimea is the Russian ruble. Therefore, it is better to change hryvnias for rubles in advance, because not everywhere the rate is normal.

All prices have increased, by 20-30 percent. But the problem is that in Ukraine prices have risen. Therefore, it is very difficult to calculate how much more expensive it has become in the Crimea. In general, meat products + dairy products have risen in price there, because it is problematic to import them from Ukraine. For other products, it is slightly more expensive than in Ukraine, but not at times.

Given that russians have a long way to go to Crimea, there were few tourists. They say about 30-40% of what was before. Therefore, there are no problems with housing! It's full! At the height of the season, we rented a room in a two-room apartment with the owners for three days at a price of 350 rubles per day. And there were a lot of passers. Grandmothers literally threw themselves on every minibus with vacationers. That is, it was the first option at a suitable price. Repairs in the apartment by the way were normal and there was hot water. As the hostess told, a year ago she at the same time rented a room for 300 hryvnia, and not for 120 (if you recalculate the rate). I do not know whether there will be problems with housing in 2015, if there are still few tourists – then it is definitely worth visiting the Crimea )).

Attitudes of Crimeans to Ukrainians

It hasn't changed much. Many live at the expense of tourism, so they meet with cordiality. But do not wave the Ukrainian flag and shout "Glory to Ukraine" – they may not understand. And not locals, but rather visiting Russians. Therefore, we do not take with us yellow-blue symbols and embroidered shirts.

There are few tourists, there are many places, prices are not cosmic, everything is super! The first time I was in the Crimea when you can safely go by minibus and there are not many people. When the queue for the cable car Ai-Petri is not three kilometers, when everywhere you can go where you want without stampedes. In general, the rest was generally enjoyable. But going to the Crimea has become a little more expensive and a little longer. But I am afraid that in the next 2-3 years everything will change, prices will rise and people will go there as they went. But crimea will remain an ideal place for hiking and outdoor activities. After all, there are simply no alternatives closer and cheaper for Ukrainians. It is an expensive flight to Turkey, in Europe there are high prices for everything. Therefore, with a backpack you can either go to the Carpathians or to the Crimea.